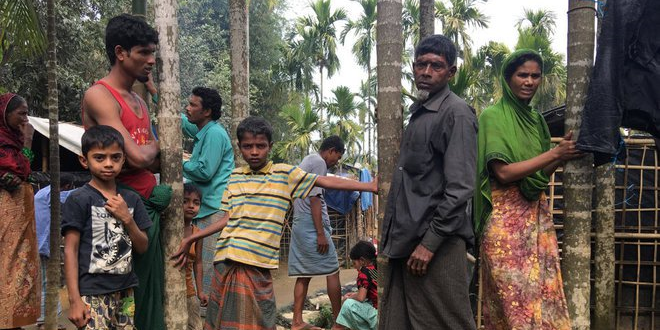 Thousands of Rohingya flee ‘no man’s land’ after resettlement talks

DHAKA/YANGON: Thousands of Rohingya Muslims have fled a strip of land on the border between Myanmar and Bangladesh after the two countries met to discuss resettling them, an official and a community leader said.
The United Nations refugee agency has expressed concern that some 5,300 people who were staying in the area — outside of Myanmar’s border fence but on Myanmar’s side of a creek that marks the international border — would be forcibly returned without due consideration for their safety.
Nearly 700,000 Rohingya fled Myanmar for Bangladesh after insurgent attacks on Aug. 25 sparked a military crackdown that the UN as has said amounted to ethnic cleansing, with reports of arson attacks, murder and rape.
Major Iqbal Ahmed, a senior Bangladesh border guard official said on Tuesday evening that roughly half of the people who had been staying in no man’s land had entered Bangladesh and made their way to refugee camps in Bangladesh in just over a week.
“They are leaving the place in fear,” Iqbal Ahmed said. “Now there are roughly 2,500-3,000 people in the no man’s land. We talked to some of them and asked them to go back, but they said they can’t.”
Local officials from the two sides met on February 20 and visited the area.
Dil Mohammed, a leader among the people who have been staying in no man’s land, said that a meeting with community leaders promised by Myanmar officials had not materialized, confirming that several hundred families had moved into Bangladesh since February 20.
“We are in constant fear. We are not going to the camps,” he said, referring to temporary camps Myanmar has established to house possible returnees under a repatriation agreement it signed with Bangladesh in November.
“There’s no guarantee for life. We need security and all basic rights including citizenship like other communities are granted by the Myanmar government,” said Dil Mohammed.
Myanmar government spokesman Zaw Htay said on Wednesday that the area was Myanmar’s territory.
“According to the rules they cannot stay there, 150 feet from the borderline. They stay there to create a situation where Myanmar security forces and government official will remove them.”
“The media, especially Reuters, and human rights organizations would put pressure and make accusations that they are being cleared,” he said. “It is a trap to put more pressure on Myanmar, to make more criticism of Myanmar.”
After the February 20 meeting, Zaw Htay was quoted in Myanmar-language media saying some of the people staying in the border area were “terrorists” linked to the Arakan Rohingya Salvation Army that attacked Myanmar security posts on August 25.
“We got information that terrorists are there,” Zaw Htay said. “This place will become a safe house or a haven for terrorists, and they can do terrorist acts on both sides.”