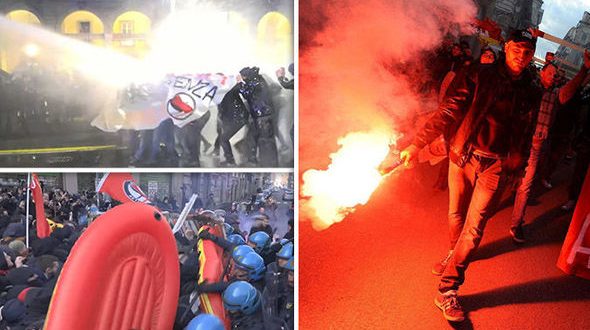 ITALY may struggle to stop the spread of violence that has hits the country’s streets once the election is over, according to an expert who claims the “real issues” of division are not being discussed.

Dozens of violent political protests have rocked Italian streets in the past two days, as fears surround the future stability of the country regardless of the election result.

The protests come as Italy prepares to go to the polls with tensions high as the bleak economic forecast and growing immigration concerns have resulted in toxic election campaigns for the upcoming vote amid fears of a revival of neo-fascist sentiment.

Italians will go to the ballot boxes on 4th March, following a campaign marred by large-scale violence, but a political expert believes that the unrest will not vanish after the vote.

In the last few days, clashes have broken out in Milan and Pisa between anti-fascist activists and supporters of anti-immigrant, populist parties The League and CasaPound.

The unrest ramped up at rallies on Friday in Pisa and Turin and spread to the other Italian cities on Saturday including Rome and Palermo.

Italian daily newspaper Corriere della Sera revealed that more than 70 acts of political violence – including stabbings, shootings, arson, smoke bombs and beatings – have hit the country in the past six weeks alone.

In the past week, there has been a fire at a left-wing community centre in Brescia, the desecration of politicians’ headstones with swastikas, and the break-in at a television studio by political activists during a live show.

“We try to explain this anger with unemployment and the economic climate, but Italy has radicalised.

“With these radicals on the streets, Italy cannot go on like this. This won’t go away on election day.

“There are too many differences between the North and South and no political party addresses the real problems.

Italian authorities fear that clashes between extremist groups will increase in the week before the election, with others fearing that this instability will only get worse in a hung parliament.

Police estimated that between 15,000 and 20,000 people attended a campaign rally in Milan led by Matteo Salvini, the head of Lega Nord.

The dramatic uptick in violence between anti-fascist and far-right activists prompted authorities to mobilise more than 3,000 police for demonstrations in Rome yesterday.