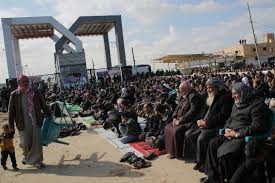 Thousands of Gazans rush to border as Egypt opens crossing

Scores, many sick, wait for their names to be called out as Rafah crossing point is opened for four days for humanitarian cases

Egypt opened its border with Gaza on Wednesday, providing rare passage for thousands stuck in the coastal enclave who have lived under blockade for more than a decade.

Thousands of Palestinians – some sitting since dawn next to suitcases packed in the hope that Egypt will allow them in – gathered at a stadium before being sorted on to buses. They raised their identification papers as their names were called out from a list.

Khalil Qeshta, 45, said medical treatment in Gaza had not helped his son, who has been suffering for months from a debilitating stomach condition causing him to vomit blood.

“I’ll go to Egypt at my own expense,” he said. “My son is five-years-old and he’s been sick for more than two years. We tried all the ways and means in Gaza, but there is no treatment. This is the third time I have tried to travel. I hope to be one of the lucky ones today.”

One student said he had been accepted to study engineering in Turkey but missed the course start date in September. He hopes to make it for the second term, which has already started.

The Rafah crossing point will be open for four days on a humanitarian basis. Egypt has kept it largely sealed since 2013, citing security reasons. Egyptian authorities have accused Hamas of aiding groups involved in the Sinai insurgency. Last year, Egypt only allowed passage on 36 days, according to the United Nations.

Some 30,000 Gazans including medical patients, students and businesspeople are on a waiting list to travel through Rafah. But not all are guaranteed.

Siham al-Zaq, 37, said she lives in Algeria and entered Gaza almost a year ago to visit her sick mother but has not been able to leave.

“I registered to travel several times, and each time Egypt opened the crossing I lived in the hope that I would return with my children to my husband but every time the attempt failed,” the mother of three said.

Her name was not read out on Wednesday, she said, but she added she was hopeful someone “listens to my suffering and allows me to travel”.

“I’m not interested in politics, and I do not care,” said al-Zaq. “What I want is to travel.”

Under Palestinian Authority control since November, according to a reconciliation agreement signed with Hamas, Rafah is the main gateway for Gaza’s 2 million residents who face a growing humanitarian crisis.

Electricity shortages have led to hospital blackouts and an Israeli blockade, imposed in 2007 after Hamas seized control, has tightly controlled the movement of people and goods out of other crossings.