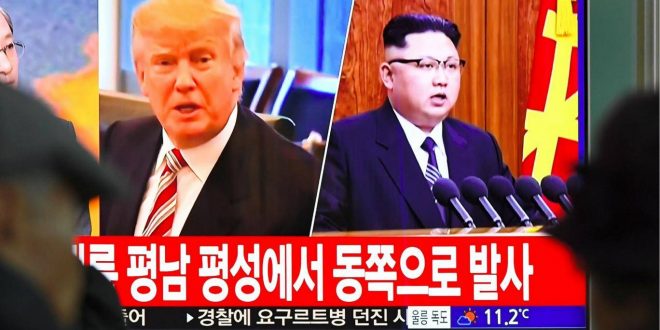 North Korea says it is unable to pay its share of the 2018 United Nations budget because of international sanctions.

The UN and US had imposed strict sanctions for Pyongyang’s continued development of its nuclear weapons programme.

North Korea’s UN Ambassador Ja Song Nam asked the UN to set up a backchannel to get around sanctions on its foreign exchange bank to pay the $184,000 in dues.

The sanctions on the Foreign Trade Bank have been keeping North Korea “from honouring its obligation as a UN member state by hindering even normal activities such as payment of the UN contribution,” the North Korean mission said in a statement late on Friday.

“It is crystal clear” the US is to blame, the statement read.

According to the UN Charter, countries in arrears in an amount that equals or exceeds the contributions due for two preceding years can lose their vote in the 193-member UN General Assembly. The General Assembly can grant an exception if a country can show that conditions beyond its control contributed to the inability to pay.

The UN Security Council sanctioned the bank in August 2017, another round in the series of sanctions imposed on North Korea since 2006.

The US had placed sanctions on the bank in 2013.

There are 12 countries in arrears of more than two years. Eight of those nations — including Libya, Yemen, and Venezuela — have lost their ability to vote in the General Assembly because they have not paid their dues.

Apart from its 2018 dues, North Korea said it is up to date with its payments.

While in South Korea for the Pyeongchang Winter Olympics, US Vice President told NBC News that the US planned to take whatever “action is necessary to defend our homeland.”

“We’re going to continue to put all the pressure to bear economically and diplomatically, while preserving all of our military options to see that that happens,” Mr Pence said.

South Korea and North Korea are competing in the games under a unified team.

North Korean Leader Kim Jong-un’s sister Kim Yo Jong attended the games as well – the first member of the dynasty to set foot south of the border since the end of the Korean War in 1953.

Ironically, US President Donald Trump has repeatedly complained about the US having to pay its contributions to the UN. Mr Trump has criticised the world body on numerous occasions for being a “good time club” and labelled it as unfair to the US and biased against Israel.