Home / Other / Refugee Library: over 1,000 books… a different sort of hunger 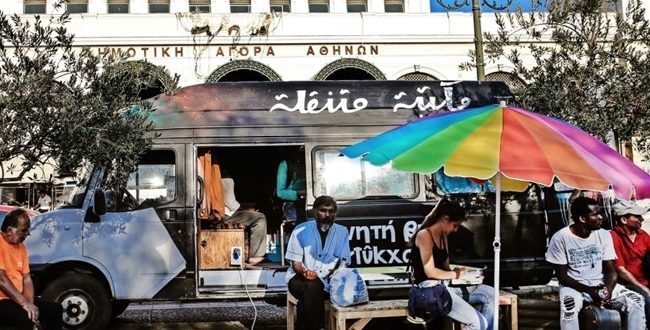 Refugee Library: over 1,000 books… a different sort of hunger

The brightly colored minivan that pulls into Athens’ food market, drawing a group of refugees around it, is not carrying something edible. The contents – hundreds of books – are there to satisfy a different sort of hunger.

For tens of thousands of refugees stuck in Greece for the past two years after European states shut their borders in rapid succession, survival is no longer an issue.

Instead, boredom and creeping despair about their future are their new enemies as they wait for months, even years, for their applications to relocate elsewhere in Europe to be processed.

Now, at least two separate initiatives have emerged to help refugees fill the long hours of their day.

One of them is Echo Refugee Library – a minivan fitted with shelves carrying over 1,000 books that does a weekly round of refugee camps in the greater Athens area, plus poorer districts of the capital where many refugees live in U.N.-rented flats.

The goal of the initiative is to “make culture accessible to all,” says Esther Ten Zijthoff, 25, the Dutch-American coordinator of the project.

The books – in English, Greek, French, Arabic, Kurdish and Farsi – have been provided by benefactors in Greece, Belgium, Britain and Lebanon or purchased with money donated online.

Ali, a 26-year-old Syrian, is among those who never misses a delivery at the food market.

“I really love having something to read. It does me good,” he tells AFP, an Agatha Christie novel under his arm.

The English mistress of the whodunit is proving a top draw for refugees, Zijthoff says.

“The mystery and romance present in her stories are well-liked by Arab speakers. We would like to have her whole collection.”

Language dictionaries are also in demand, with many readers borrowing them to photocopy and keep close at hand.

In another part of the city center, a similar initiative draws Syrian and Afghan refugees to the offices of We Need Books, a volunteer group formed last year that also gives language classes in Arabic and French.

We Need Books has the largest collection of Farsi books in Athens, including over 150 sent directly from Afghanistan, says co-founder Ioanna Nissiriou.

Here, the most popular book is Arabian Nights. The sole copy in Farsi, delivered in June, is already in tatters, she notes with pleasure.

“Initially our goal was to help refugees escape through literature. But now we also seek to educate the children and help them integrate,” explains Nissiriou, a 38-year-old former journalist.

Seated on a brightly colored pouf, 16-year-old Zahra from Afghanistan has just discovered the works of iconic Greek writer Nikos Kazantzakis, author of Zorba the Greek and the Last Temptation of Christ. “I like this book because it’s a new culture for me,” she says while poring through Nikos Kazantzakis’ Odyssey, a sequel to Homer’s classic opus.

“But my favorite is the Tales of the Brothers Grimm, which is similar to fairy tales I used to read as a child,” the young Afghan says.

Tags 000 books… a different sort of hunger Refugee Library: over 1