Home / Last News / PRESIDENT AOUN: We do not fight to become martyrs but to live in dignity and safety with our children 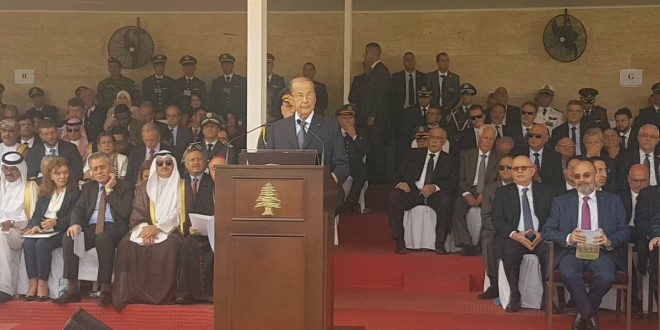 PRESIDENT AOUN: We do not fight to become martyrs but to live in dignity and safety with our children

Today, you have successfully completed a phase of your academic life to start your professional life. You have chosen to have it in the heart of the military institution, thus you have chosen to be the protectors of this country’s sovereignty and independence, and the watchful eye on its security and on the freedom and tranquility of its people.

You must be very proud, class of Lieutenant Colonel Martyr Sobhi Al Akoury, that you are standing as a boulder of safety to your country and to your people in the midst of political attractions and divergence of opinions. The hearts of the Lebanese, from all parties, political stripes and groups surround you. There is no bigger or stronger Lebanese consensus than the one for the military and security institutions. The example of the martyr Lieutenant Colonel after whom you have named your class is the best demonstration of your tremendous sacrifices in the defense of your country with whose security and integrity you have been entrusted till martyrdom.

As you all know from the military doctrine, being a soldier is not a job, it’s rather a message. When a soldier fights fearlessly on the front and faces danger upfront, he does so not because he covets a salary or a rank but rather because he believes in the message he holds and in the role he plays, he does so because he is aware that it is his responsibility to protect his land and his fellow citizens even if that would cost him his life.

However, although martyrdom is always present in our minds, it is not our aim. We do not fight to become martyrs but to live in dignity and safety with our children and all our people. We promise our martyrs who fall in the field of honor to run the full course without forgetting their dependents, fathers, mothers, spouses and children to whom we will ensure dignity of life in a free and safe country where they shall rest assured about their today and their tomorrow.

In 1958, I stood just like you are standing today, I received the ‘sword of heroism’ and I took an oath to fulfill my duty in protecting the flag of my country and in defending my nation, Lebanon. This oath was not just words that I echoed at my graduation and whose effect expired with the end of the ceremony. Ever since, this oath has become embedded in my conscious and it has drawn my life journey. Honoring this oath has cost me much of exhaustion and many sacrifices, but it has given me the most precious thing in life: the peace of a free conscience.

Today, you are taking the same oath. If you honor it, you will inevitably get exhausted but you will sleep with a free conscience; and if you ignore it, you might have a physical rest but you will certainly have a troubled conscience…

I am confident that you’ll choose to live with a pure and free conscience.

This is not the first time that I address you; you have always been my family and my friends when I was in positions of leadership and decision-making. However, this is the first time that I am addressing you as the Higher Leader of the Armed Forces. Fate has made it that your graduation coincides with major challenges that the military and security institutions are facing in fighting the dangers of terrorism and the aggressions against Lebanon. You have all succeeded in dismantling numerous terrorist networks and cells, in conducting pre-emptive strikes against terrorists and in arresting dozens of them. The last victory for Lebanon was the liberation of a major region on the eastern borders from the claws of the dark organizations and the re-establishement of tranquility and security in it. We are now waiting for our armed forces to achieve a new victory, liberate what remains from the regions that have been violated for years by terrorists and we hope that these developments would accelerate the disclosure of theswhereabout of your comrades that have been kidnapped three years ago and whose fate is still unknown, easing the pain that have been inflicted on their families, their institution, and all the Lebanese people.

I stand here, before you, to assure you that there will be no retreat in the face of terrorism in all its aspects and organizations. The Lebanese army along with the security bodies will be in permanent readiness to confront them. Lebanon has been a pioneer in its war against terrorism; our army has confronted terrorism in successive combats and succeeded in strengthening the political and security stability in the country and in stabilizing peace in our southern borders. That was accomplished through the efforts of the people and the commitment of Lebanon in executing all relevant resolutions.We must invest in this stability just like political officials to achieve an economic renaissance to which the Lebanese are longing.

Do not allow the campaigns of skepticism underpin your morale. Be up to your responsibilities and your military integrity will guard you against error.

You are from all of Lebanon and for all of Lebanon. The challenges that our nation and our society are facing impose on us, more than any time before, to be united.

You and your brothers in arms in the other security forces should work together for the same purpose: to protect Lebanon, secure its borders, its internal security and the rule of law therein.

Difficult tasks are inherent to your destiny but great hopes are placed around you, the confidence entrusted to you by the Lebanese is infinite and the love they shower you with is endless.

Always remember that you have taken this oath and that you carry a message crowned with honor, sacrifice and loyalty.

The charge that is thrust upon you today is the charge of a nation and its people.