Home / Other / Headway on AIDS threatened by funding slowdown 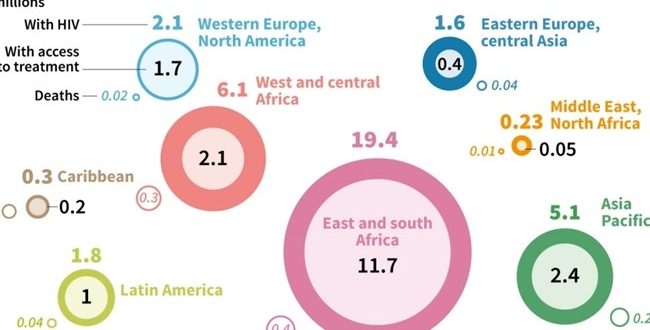 Progress in beating back the AIDS epidemic risks being eroded by a funding shortfall set to grow under Donald Trump’s proposed cuts to global health projects, experts and campaigners warned ahead of a major HIV conference. If adopted by Congress, the 2018 Trump budget could deprive some 830,000 people, mostly in Africa, from life-saving anti-AIDS drugs, according to calculations by the Kaiser Family Foundation (KFF), a California-based health policy NGO.

“We will see lives needlessly being lost,” said Linda-Gail Bekker, president of the International AIDS Society (IAS) hosting some 6,000 experts in Paris from Sunday to take stock of advances in HIV science.

“We’re not talking about maybe a slowing down … if these [U.S.] cuts come about we could very well see a real turnaround in terms of the progress that has been made,” she told AFP. A Trump budget could lead to nearly 200,000 new HIV infections, according to the KFF.

It could also leave as many as 25 million couples without access to sponsored contraceptives, which not only prevent pregnancy but also virus spread.

“I cannot tell you how anxious I feel … To have the funding carpet taken from under our feet just seems such an incredible travesty,” Bekker said.

The United States has for years been the biggest contributor to the global fight against HIV infection, accounting for about two-thirds of funding by governments.

Trump’s proposed budget, submitted in May, would reduce this amount by about $1 billion, according to Health Global Access Project, an activist group which crunched the numbers.

The U.S. president put forward a blueprint which, in its own words, “reduces funding for several global health programs, including HIV/AIDS, with the expectation that other donors can and should increase their commitments.”

The draft spending plan proposes to “maintain current commitments and all current patient levels on HIV/AIDS treatment” under the President’s Emergency Plan for AIDS Relief, or PEPFAR, set up by George W. Bush in 2003.

The program provides anti-retroviral treatment (ART) to over 12 million people.

The goal of PEPFAR, said Anthony Fauci, director of the National Institute of Allergy and Infectious Diseases, a U.S. government research agency, “is to get more people who have been newly infected on therapy” – which means more money.

“If you don’t increase it, you … have more responsibilities that you are not able to meet.”

Trump also proposed a 17 percent cut of $222 million to the government’s 2017 contribution of $1.13 billion to the Global Fund to Fight AIDS, TB & Malaria, which provides about 10 million people with ART.

“The future outlook of donor funding for HIV remains uncertain, given recently proposed cuts to HIV funding by the United States, amid other competing demands on donor budgets more generally,” the KFF report said.

Since the epidemic erupted in the 1980s, 76.1 million people have been infected with HIV, the virus that causes AIDS.

Some 35 million have died.

Last year, AIDS killed a million people and infected another 1.8 million, according to the U.N.

And while infections and deaths are on the decline, the number of people living with HIV – requiring lifelong treatment – continues to grow.

By 2020, the U.N. is aiming for 90 percent of HIV-infected people to be on medication. But to achieve this target, annual spending must reach $26.2 billion, according to UNAIDS.

In 2016, public and private funders were able to muster $19.1 billion for AIDS research, prevention and treatment programs in poor and middle-income countries.

“We are maximizing the use of every dollar available, but we are still $7 billion short,” UNAIDS executive director Michel Sidibe said this week.

The IAS conference organizers warned in a statement that “all of the scientific challenges still before us are threatened by a weakening resolve to fund HIV science.”

The gap is set to grow larger.

“It is … a difficult moment for all of us,” said French HIV expert Jean-Francois Delfraissy, who will co-chair the Paris meeting, citing a “modification in funding in the U.S.” and a shift in “the political vision of the U.S. government” on working with other countries.

Just over half of AIDS-related health spending came from domestic sources in 2016, but many of the poorest countries remain heavily reliant on foreign help.

“This raises concerns about the ability of the global community to successfully tackle the epidemic.”